"Pope Saint John Paul II points to our first parents' original act of disobedience (in the Garden of Eden) ... In that original sin, we find a primordial rebellion against God's fatherhood, a desire to do away with fatherhood itself. This is our enemy's underlying plan: to first diminish and then eliminate our reliance on God, the benevolent Father. To do this, Satan's primary strategy is to damage and abolish human fatherhood, the very relationship through which each of us first glimpses what God's fatherhood might be like.

Today's attack on fatherhood, and by extension, motherhood, is multi-pronged and breathtakingly damaging. Forty-one percent of children are born into unmarried homes in our day, an increase of 700 percent from 1950, when the out-of-wedlock birthrate was a mere 6 percent.

Men, your presence and mission in the family is irreplaceable! Step up and lovingly, patiently, take up your God-given role as protector, provider, and spiritual leader of your home."

The above content is excerpted from the highly recommended book, "Manual for Men" by Archbishop Thomas Olmsted, published by Tan Books in 2017 and available at Tanbooks.com

We also recommend Bishop Olmsted's "INTO THE BREACH", a guide for young men, available at no charge on the website of the Knights of Columbus via this link: Into the Breach

Quoting from the Knights of Columbus article introducing this booklet: "We live in a time of crisis for religious faith that must be met by men with a heartfelt embrace of masculine virtue. To outline the challenges we face and devise a plan of battle, Bishop Thomas J. Olmsted of Phoenix has written this groundbreaking document, Into the Breach. Addressed originally to the men in his diocese, the document is made available here to all Catholics by the Knights of Columbus. The Knights are pleased to partner with Bishop Olmsted in making this document more widely available to all college men and in providing a study guide. Both are available as PDF downloads."

For a sure remedy to restore fatherhood and the family in today's confused and troubled culture, scroll to the bottom of this page and hear from Father Donald Calloway.

Discern which presidential candidate and which political party stands for the traditional Christian family - by learning the facts we have collected on this site, for example, here: strong families and strong values

If you don't know where the records and positions of the parties and candidates on these core matters, you cannot vote in good conscience  and need to gain this knowledge. Learn the facts on these pages of this site:

The Catastrophe of Fatherless America

What is it that is devastating the black community today? Many in our current climate would say the main issue is racism, but much of the mayhem we see today is linked to fatherlessness. The breakdown of the family at large has caused a huge crisis in our society. For instance, statistics show that the majority of prison inmates come from broken families.

Government subsidies have created a permanent underclass of people by subsidizing fatherlessness and unemployment.
Prior to the welfare programs of President Johnson’s Great Society, the rate of illegitimacy in the black community was relatively low and families were intact. And as economist Thomas Sowell points out, the poverty rate for African-Americans fell by 40 percent from 1940 to 1960 - “just before the “Great Society” welfare programs. Today, the illegitimacy rate is over 75%, which is devastating -“by virtually all accounts. Three out of four African-American children are not born into a traditional family with a mother and a father.

The foregoing paragraphs are excerpts from the June 17, 2020 article by Jerry Newcombe appearing on the website of Renew America. Here is a link to this article on this site: Jerry Newcombe

* This statement is consistent with the statement made by President Donald Trump in his July 6 2017 speech in Warsaw, "if we do not have strong families and strong values, then we will be weak and we will not survive" To read the entire speech, link here to our site's page, President Trump: Record and Positions.

Recall our website’s home page: When we were a nation of strong families, worshiping God, we were a strong united nation. History teaches us that the decline of the family as the social unit is followed by the breakdown of society and the death of the nation. Turning away from God has the same result: The great kingdom of David and Solomon, powerful in 1,000 A.D., fell to Babylon in 600 A.D., after the people stopped worshiping God and turned to idols.

Renowned Pastor Jack Brewer, who leads a prison ministry, identifies fatherlessness as a grave root cause problem for African Americans. Link here to  Our kids don't have fathers! on our site's Race Relations page to learn Pastor Brewer's insights.

Scroll down to learn about the related alarming increase in the U.S. Incarceration Rate. 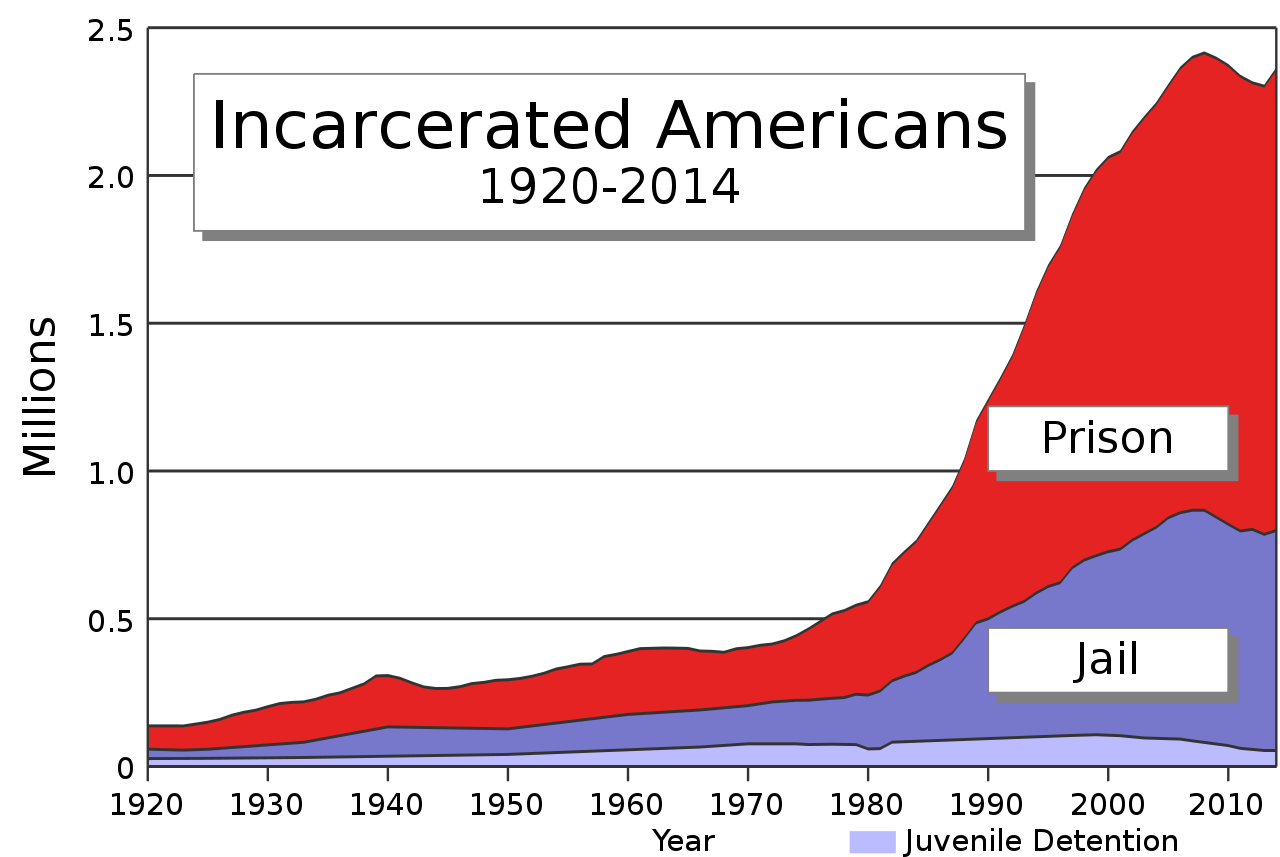 SPIKE IN THE INCARCERATION RATE SINCE THE 1970's:

This alarming trend in the rate of incarceration parallels the U.S.A.'s concurrent drift away from being a society of God-centered father-led families, along with the increasing use of birth control and increasing rate of abortions, facilitating sexual relations outside the context of marriage and leading to  the increasing rate of children born into single parent homes without fathers.

The United States now has 25 percent of the world’s prisoners, while having only 5% of the world's population. In other words, we imprison people at five times the worldwide average rate.

The severity of the concern that Jack Brewer raised to President Trump in his June 11 2020 White House meeting (discussed in our site's page on Race Relations ) is confirmed by the following fact:

In 2017, blacks represented 12% of the U.S. adult population but 33% of the total prison population. In other words, blacks are being imprisoned at almost three times the nation's average rate of imprisonment.

Whites accounted for 64% of adults but 30% of prisoners.

Hispanics represented 16% of the adult population, they accounted for 23% of inmates.

What's the answer? How do we restore fatherhood in America?

In 2019, Father Donald Calloway published a highly recommended* book, Consecration to Saint Joseph**, that directly addresses this concern, and provides a solution. The following are excerpts from this book:

"God is telling his Church that, in order to defend marriage and the family, elevate morals, recover lost ground, and win souls for Jesus Christ, we need to bring Saint Joseph onto the battlefield."

"To combat and overcome Satan's deceptions, (we) need Saint Joseph. His example and protection are the only way out of the confusing mess we are in. Who else can we turn to show can help us understand what marriage and the family are all about if not the Head of the Holy Family and the Terror of Demons?"

"All men need to realize the power that fatherhood and purity have over the forces of darkness. All fatherhood is a threat to Satan... Today, God wants to make Saint Joseph's fatherhood known and replicated in the world. This terrifies Satan. The devil knows what the intercession of Saint Joseph is capable of doing. If men resemble Saint Joseph, the kingdom of Satan will be destroyed."

** by Marian Press. available for purchase on the website of the Marians of the Immaculate Conception via this link: Purchase Consecration to Saint Josep